Mrs. Selby hosted three viewing parties recently, one for each TV adaptation of the following Dorothy Sayers’ novels: Strong Poison, Have His Carcase, and Gaudy Night. 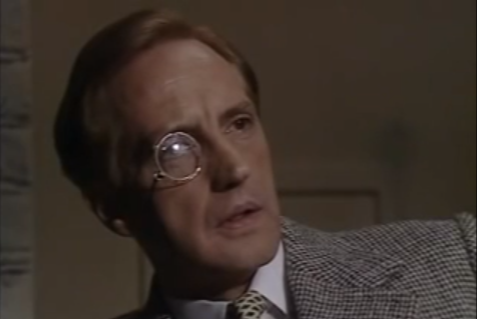 Set in the late 1920s through mid 30s, each stars Edward Petherbridge as Lord Peter Wimsey, the aristocratic sleuth, and Harriet Walter as Harriet Vane, the mystery writer.

Although, like other screen adaptations, they tend to leave out substance from the books and can’t fully capture the author’s energy, humor, and literary wit, there’s much to recommend them. Mainly the way the actors interpret their characters, the humanity they bring out, and the chemistry they enjoy between them. I really liked Petherbridge’s Wimsey and Walter’s Vane. And I was very fond of Richard Morant’s interpretation of Bunter (Peter Wimsey’s valet and assistant in criminal investigations).

Along with Mrs. Selby and me, there were three other regulars: Dora, Michiko, and Gilbert Frisch. However, Lewis came by for Strong Poison; Hank & Ivy watched Have His Carcase, because they’d heard about the code-cracking scene; and Howard popped in for Gaudy Night, mostly because of his interest in the Oxford scenes, his interest in Mrs. Selby’s red wine, and his need to procrastinate on an assignment due two days later.

So, that said – what were our impressions of each adaptation?