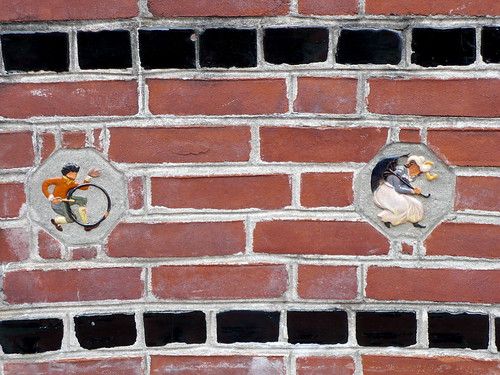 Kilter Street Manor is a Victorian mansion of the kind that Edgar Allan Poe would have loved. He would have buried people alive in there left and right.

The mansion initially belonged to a family of wealthy deviants. The last of the bunch was a psychiatrist who had kept an assortment of unwilling patients under his roof. When he was finally killed by a mob, the house was abandoned until World War II. Then it was used to store dummy tank parts and serve as a rest home for wounded carrier pigeons.

Eventually, each of its three main floors got converted into apartments. As for the basement and attic… they were renovated too, to some extent; though there may be parts of them that remain unexplored or undiscovered.

By the time the building fell into Zeb’s hands, it was falling apart. Other landlords had neglected it or fled from it in terror; only a couple of them made any lasting contributions to the livability of the old house. By and large, it’s Zeb who has turned it into the place it is today: shabby, mysterious, and strangely welcoming. A nice enough place to call home if you don’t mind feeling disturbed sometimes.

Erebus Plimpton (1801 – 1863): First owner of Kilter Street Manor. Had it built between 1858 and 1862. Was a merchant in whale oil, rifles, and exquisite handmade cabinetry produced by seven artisan slaves on his brother’s plantation in Georgia. Died under mysterious circumstances midway through the Civil War. Survived by: Garnet Plimpton (wife), Julian Plimpton (brother), Duncan Plimpton (nephew), and Saxon Witherby (nephew).

Garnet Plimpton (née Witherby) (1810 – 1885): Author, medium, wife to Erebus Plimpton, daughter of a successful textile factory owner. Claimed to have channeled the spirits of moral scolds and wrote their advice in a book, “The Ponderous Path to Heaven,” providing people with guidance on how to avoid sin and secure a comfortable place in the afterlife. Enjoyed partaking in snuff and striding around the woods in a pair of lavender boots, whipping at wild animals with a riding crop. Suffered a mysterious and fatal defenestration ten years after the death of her second husband (and late husband’s brother) Julian.

Julian Plimpton (1804 – 1875): A southern planter for much of his life, he moved into Kilter Street Manor to live with Garnet Plimpton, his brother’s widow, at the conclusion of the Civil War. Spent his post-war years drinking, gambling, hunting, and, once or twice, attempting to raise the dead. For a brief time, converted the Kilter Street Manor cellar into an opium den. Married Garnet Plimpton in 1873 and died two years later under mysterious circumstances.

Duncan Plimpton (1840 – 1918): Son of Julian Plimpton and a slave mother he never knew. At age 11, his father had him start training to work on exquisite handmade cabinetry. At age 14, his father decided that maybe he should learn to read. Remained a slave until the war’s end, after which his father formally acknowledged him. Moved to Brooklyn, where he operated a successful furniture-making business. Never married, and made only one month-long visit to Kilter Street Manor, in which he attempted to find out more about his mother and her possible whereabouts. Lived in Brooklyn until his death in the flu pandemic of 1918. Was active in the Temperance Movement.

Saxon Witherby (1855 – 1920): Psychiatrist. Keenly interested in pain. Pain in humans, pain in animals. Also, the olfactory response. Wrote a number of articles on pain and smell. Also a local politician of some influence. In his later years, regularly kept patients at Kilter Street Manor. Was murdered by an angry mob.

After a period of abandonment, and then the mansion’s usage during WWII as a storage facility for dummy tank parts and a home for wounded carrier pigeons, a period of landlords and landladies ensued, including:

Tony I, the Silent: From 1950 to 1962, undertook the initial restoration of the manor and its conversion into apartments. Called it Kilter Street Manor Apartments, an unusually long name for a man who preferred not to say more than one or two words at a time. Died when a gargoyle from above the front door fell on him.

Tony II, the Meek: Oversaw the apartments from 1962 to 1965, after which he fled in terror following a Mysterious Incident in the Afternoon.

Bloody Claudia: Instilled dread in her tenants and in whatever other beings/entities/creatures appeared to inhabit Kilter Street Manor Apartments. Would periodically emerge from the cellar covered in blood. Successfully converted parts of the cellar (now referred to as the basement) into a rec room and laundry room. Reigned from 1966 to 1984, the year in which she retired to Tobago.

The Slumlord Triumverate: Hank, Lou, and Lucius Three-Fingers. Stuck around from the mid-80s to 2000. Let the apartments greatly deteriorate. Moved on to more lucrative prospects in West Philly.